Here is another post about Let's Test conference. You can read at least two more detailed opinions about it by Hannes Lindblom (@HannesLindblom) or Dan Billing (@TheTestDoctor). Also hashtag #LetsTest in Twitter is quite interesting reading.

Shortly – it's the best conference I have ever attended. Longly – it's not quite conference, but some kind of community meeting. The slogan on badge – "By Testers For Testers – Because People Matter" – is absolutely true.

I arrived at Runo a day before official start, so I also write a little bit about Day 0. Venue is very beautiful and it's a good place for knowledge and thinking. The level of all services (room, bed, food, wi-fi, number of outlets etc) was quite hight, so there were no distractions at all.

Every participant got a little bear, who suggest to test (see title on his shirt), nice notebook and badge. I liked, that every one should write their name (or whatever they want) on badge by them self, so they are all individual and unique. There were also 3 k-cards (red, green, yellow) for questions. 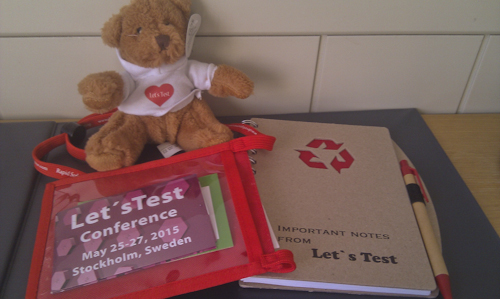 A lot of people also arrived on Sunday, so socialization part started immediately. Han Toan Lim (@MIndfulTester), who was doing a workshop What I Learned From Juggling, brought devil sticks and taught willings to deal with them. 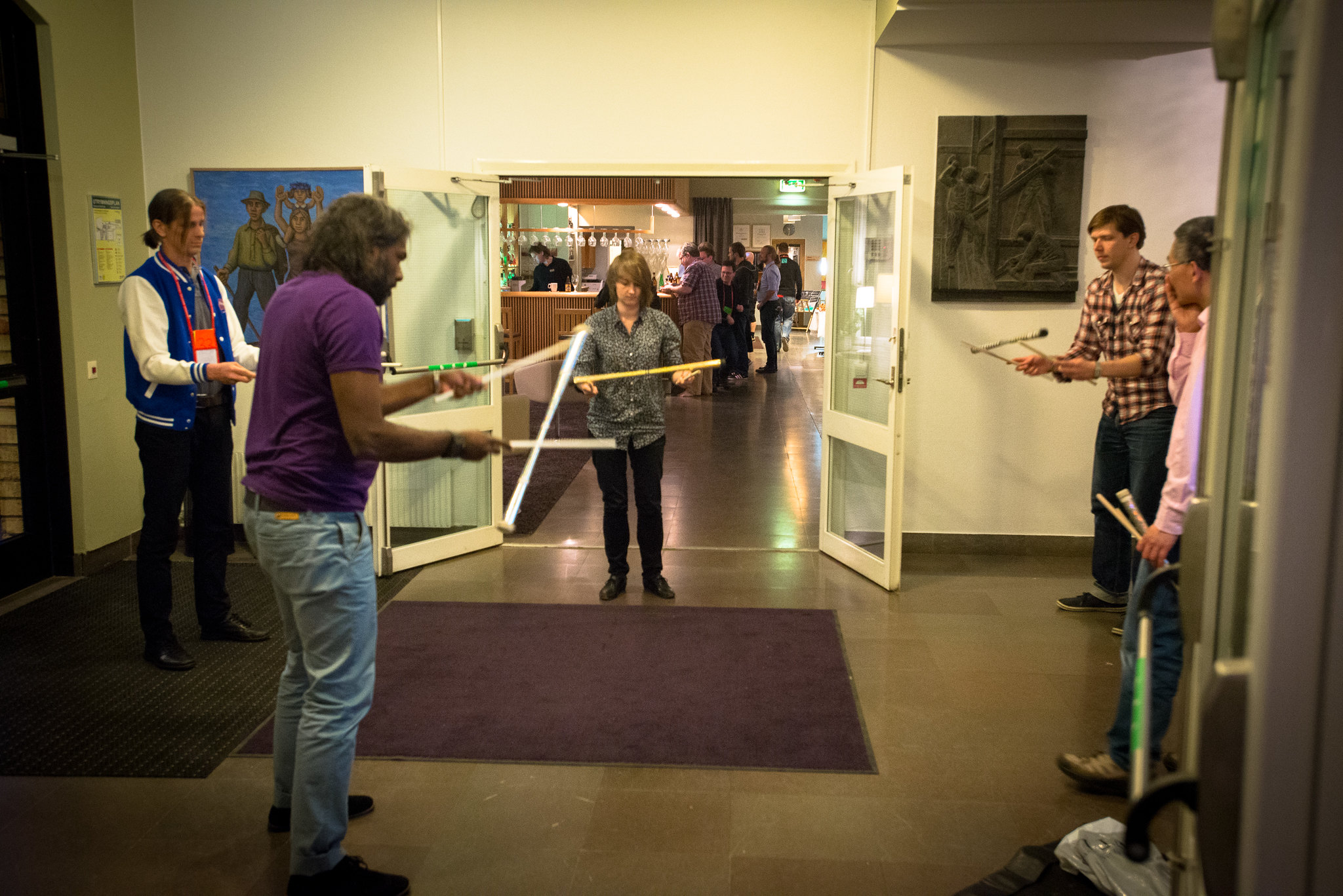 Kristjan Uba (@kristjanuba), Henrik Andersson (@henkeandersson), me, Siim Sutrop (@SiimSutrop) and Han Toan Lim. Photo from Let's Test Conference Flickr.
Day 1 started with keynote There Was Not a Breach; There Was a Blog by Ben Simo (@QualityFrog). 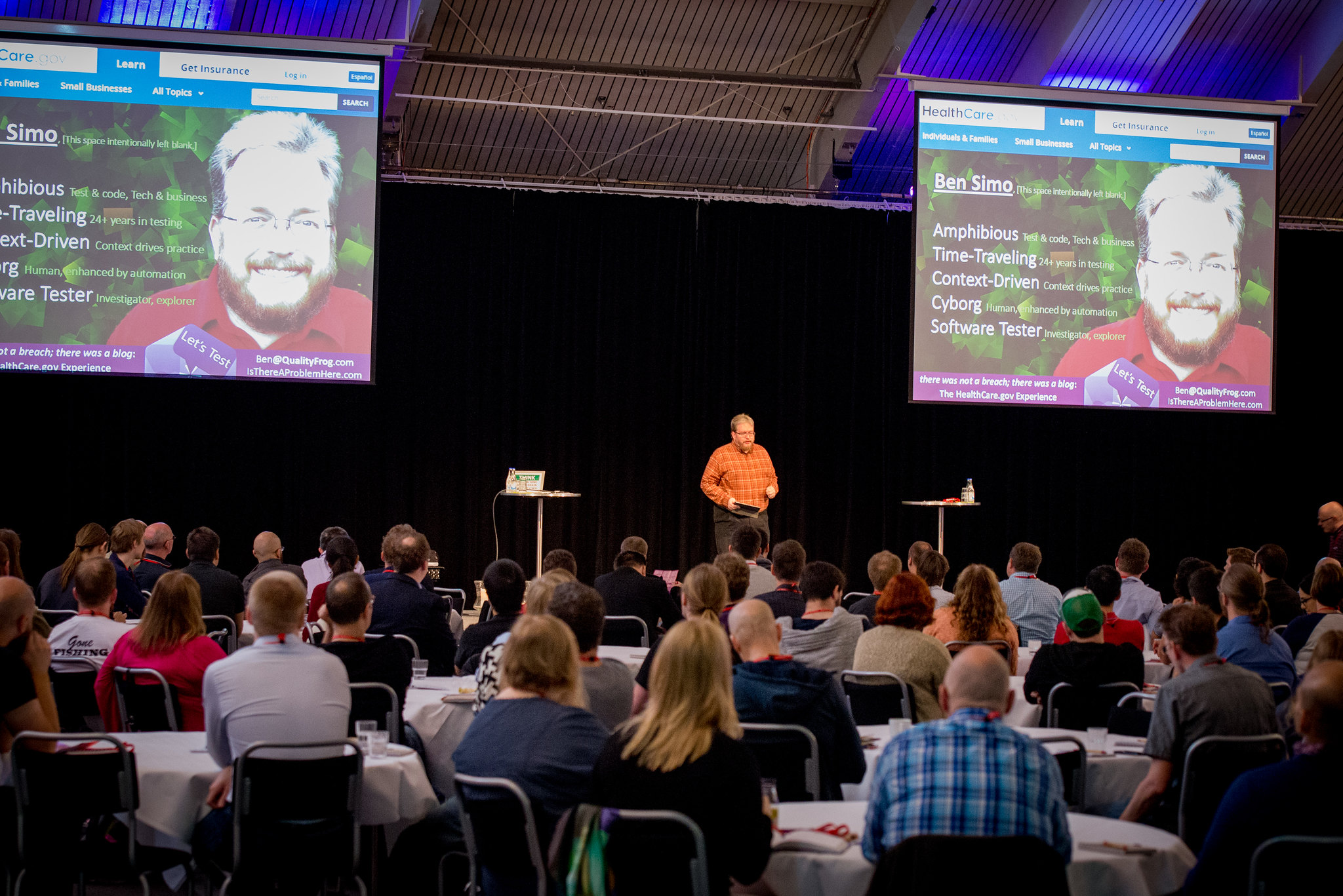 Photo from Let's Test Conference Flickr
This is actually the same keynote as in CAST last year and you can see it on Youtube – CAST 2014 Keynote . It was slightly modified, but mainly the same. Very good keynote, especially for those, who haven't seen CAST version. Ben Simo told very interesting true story combined with educational parts.
Main takeaway – if you find security bug don't do harm and don't publish info, that somebody may use to do harm. 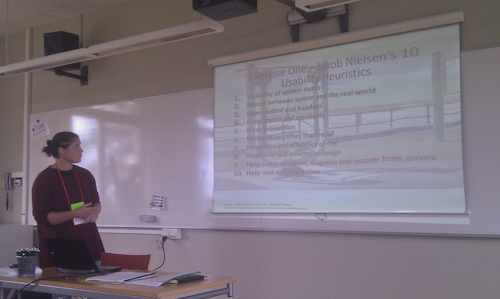 We needed to do some exercises in pairs and here comes a challenge – Michael Bolton (@michaelbolton) decided to join our pair for couple of minutes. I was in pair with Christina Ohanian (@ctohanian) (who did a workshop A Note on Notetaking Using Mindmaps and who draws beautiful mindmaps) and we needed to test prototype according to Shneiderman's Eight Golden Rules of Interface Design. Mr Bolton a little bit chided us about not making notes while we were exploring the application and shows as example which notes he would take in this case. Also he told us, that Jonathan Bach once told him, that he doesn't usually look for bugs during the exploring, but he looks for people, who can take advantage of application, which makes it easier to find important vulnerabilities, that can be exploited (it's not a quotation, it's how I remember it).
Main takeaways from workshop itself – be aware of time, complexity, skills and external factors, and you can use at least 5 tactics to deal with them: cheat sheets, heuristics, rubber duck, visualization and practice.

A Journey Towards Self-Learning by John Stevenson (@steveo1967) 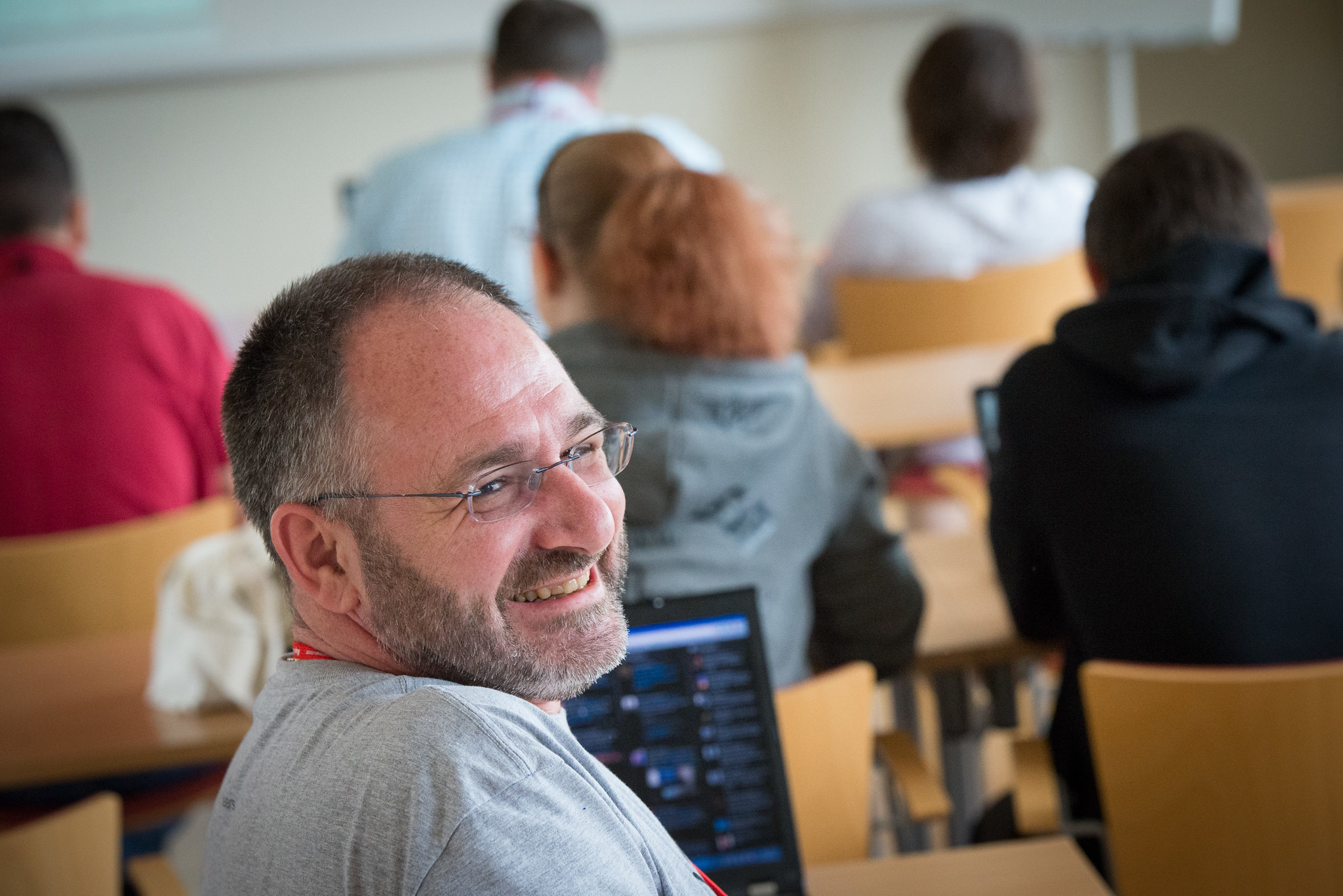 Photo from Let's Test Conference Flickr
I really liked his book The Psychology of Software #Testing and even wrote a post about it.
All participants were randomly divided into 3 groups (and I randomly got into one group with my 2 colleagues) where we did a lot of exercises using ARCS model of John Keller (Attention, Relevance, Confidence, Satisfaction). Main takeaway – if you want to learn something try to write about it or teach it. Also interesting blog post was mentioned – Oracles Are About Problems, Not Correctness by Michael Bolton. 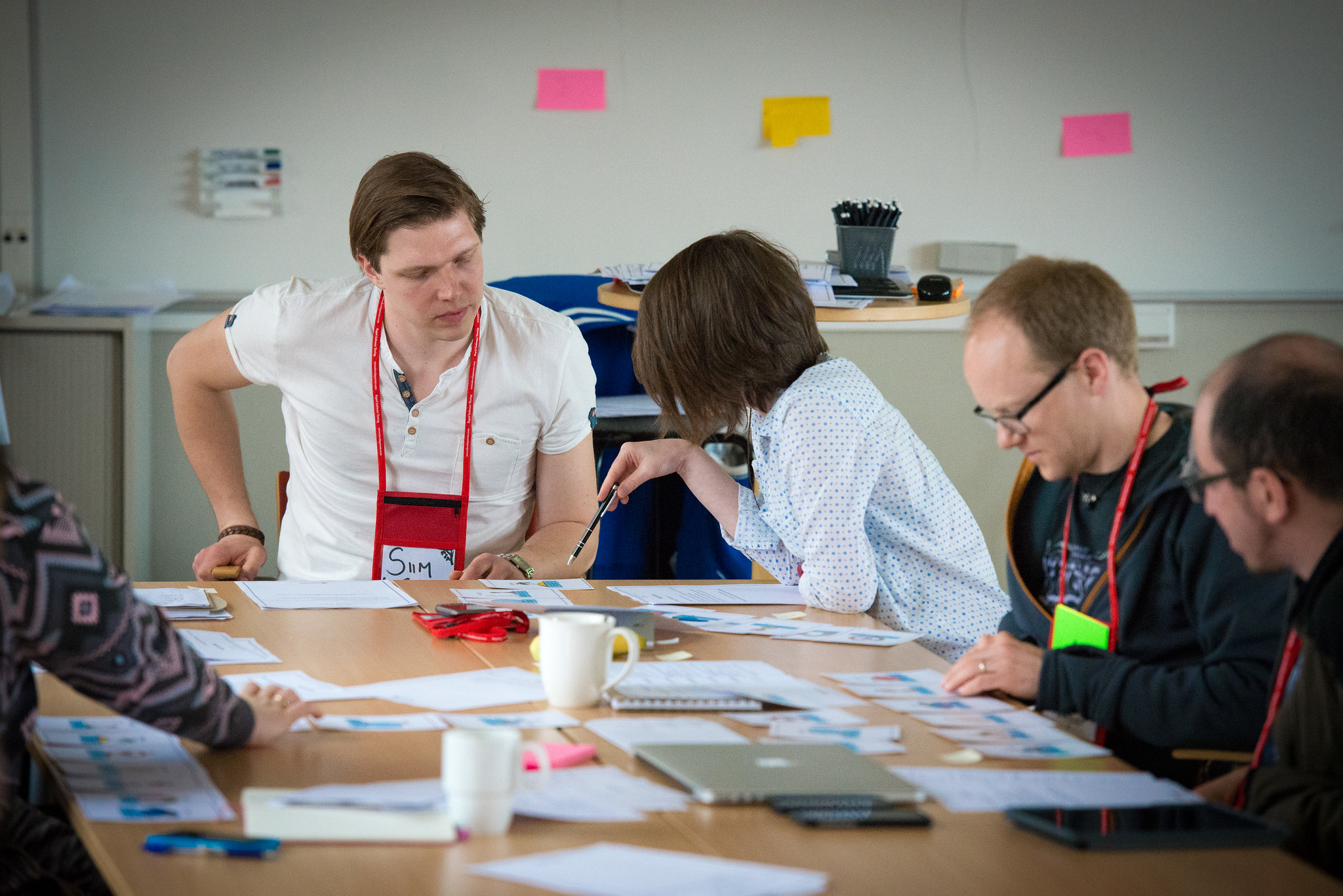 Me explaining to Siim Sutrop my values and priorities. Photo from Let's Test Conference Flickr
A tester's Walk in the Park by Ilari Henrik Aegerter (@ilarihenrik) 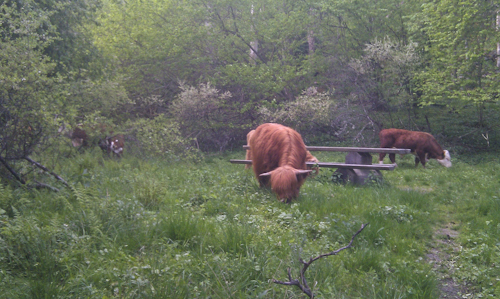 Unusual format of the session – we just walked and talked about testing. I liked it, despite the fact, that I expected more philosophy from Ilari Henrik. Venue is very beautiful and walking there is a great pleasure.


In the evening there was an open bar, TestLab and socialization. 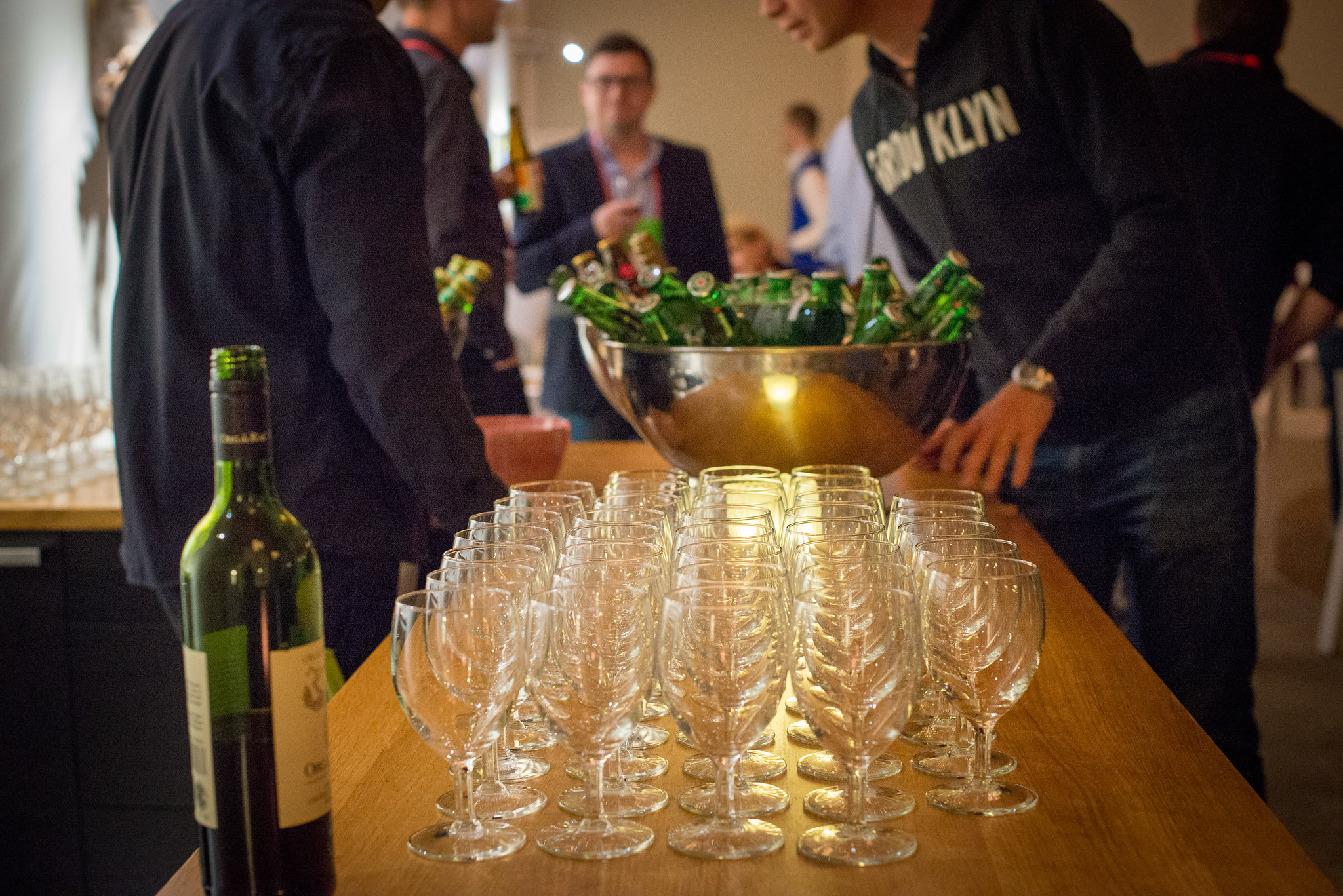 Photo from Let's Test Conference Flickr
I really liked TestLab – it was great opportunity to test with great testers. For example, I tested a little bit some planning application with Rikard Edgren, who talked about serendipity on Nordic Testing Days 2014 and managed to crash the application by some random action.

At the end of the first day I was in some kind of cultural shock. It's a magical place for tester to be.